When it comes to cycling, southern British Columbia offers some of the world’s best terrain. Here are four regions to hit the trails: 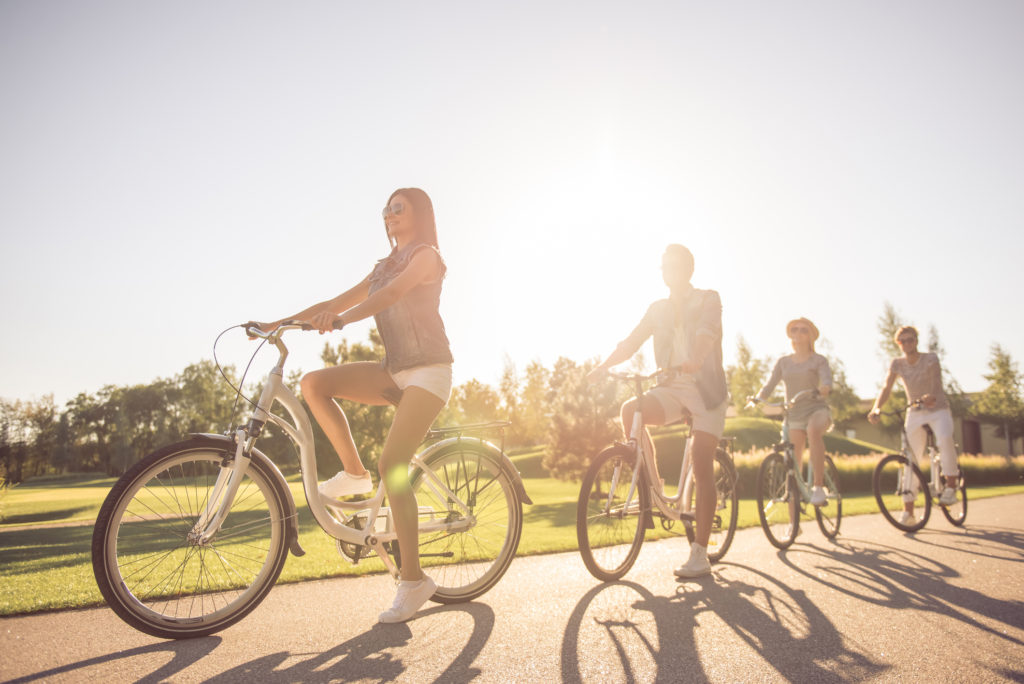 With camera, guidebook, snacks and water in place, my two daughters and I set off on our 150-kilometre cycling route – an idyllic three days, free-wheeling through forests, beside flower-filled meadows and above crystalline lakes. We loved the easy incline of 2.2 percent grade which is the steepest a railway can be.

Construction of the Kettle Valley Railway (KVR) began in 1910 over some of BC’s most rugged terrain; today the abandoned corridor offers 600 kilometres of wilderness cycling.

Between Beaverdell, a wink of a community along Highway 33 to Naramata, a vineyard-rich region on the eastern shores of Lake Okanagan, we spotted wildlife, picnicked in shady spots above sunny lakes and visited wineries. The first night – after about 55 kilometres – we spent in charming McCulloch Lake Resort, the second night in the historic and rustic Chute Lake Resort, famed for home-baked pies.

The highlight of the trip is easily Myra Canyon, a plunging, horse-shoe shaped gorge laced with eighteen, picturesque trestle bridges. Cycling beside burnished cliffs above the deep chasm is a thrill. The original trestle bridges were destroyed by fire in the summer of 2003. They have recently opened to once again allow two-wheel and foot traffic to experience the phenomenal landscape. www.myratrestles.com

The province’s capital, located on the southern tip of Vancouver Island, has been recognized by Statistics Canada as having the highest per capita bicycle usage in the country, and with good reason. With its temperate climate and vast network of bike-friendly routes, who wouldn’t want to hop onto a bike saddle?

Probably its best known route is the Galloping Goose Regional Trail, used by commuters and pleasure pedallers, it take you along woodsy trails, over trestle bridges, through bird sanctuaries, beside cattle grazing and pretty farmland, past a marsh and through rainforest. It is well marked, scenic and offers dozens of options for an easy few hours cycling or an overnight weekend excursion — cycle to Sooke for an overnight. It is about 40 km each way from Victoria. The trail’s intriguing name is after a 1920s rail-car once used to transport passengers between Victoria and Sooke.

Don’t leave Victoria without following my favourite — the Seaside Touring Route. It fringes beaches and takes you through pretty neighbourhoods where you gape in wonder at gardens prolific in blooms; you pass scenic bays and the Strait of Juan de Fuca. At Oak Bay Marina, you drool over expensive yachts, as well as people-watch as strollers enjoy the waterfront.

This coastal cruise is tailor-made for rest stops. For example, at Gonzales Bay, I discovered a historic Chinese Cemetery and a peaceful bluff that overlooks the water. You can hop off at beaches where families romp and follow a wilderness trail in vast Mt. Douglas Park. This route showcases the outdoor lifestyle in this western city as well as astounds with the scenery.

When you visit Vancouver, it is a rite of passage to hop on a bike and cruise the Stanley Park Seawall. While the 8.8 km seawall is hardly a day trip when it comes to distance, you can spend hours taking in the 400 hectare park’s highlights. On a designated paved path, head east near the Vancouver Rowing Club and enjoy the cityscape across the water. Yes, that is a cannon along the shoreline, better known locally as the Nine O’clock Gun. Pause at Brockton Oval to enjoy the totem poles, then pedal past the small lighthouse to catch your first glimpse of Lion’s Gate Bridge.

As you continue, don’t miss the Girl in a Wesuit statue out in the harbour. Next you will come upon the Empress of Japan, the figurehead of a trading vessel that sailed from Asia at the turn of the 19th century. After you pass under Lion’s Gate Bridge you soon see a famous, natural landmark. Siwash Rock, a jagged pinnacle jutting out of the water is named after a Native legend.

Keep pedaling for lovely views of English Bay and, look across the water to the trendy neighbourhood of Kitsilano. Past Ferguson Point, keep left to visit Lost Lagoon. Pedal where Weeping Willow trees drape over the lush lagoon that was named by the famous Mohawk poet, Pauline Johnson. Stop to admire wildlife – heron, trumpeter swans, mallards and wood ducks, call the picturesque lagoon home. You’ve completed the seawall; head to the West End for ice cream or other treats. This is possibly one of the world’s best urban cycle routes. There are a number of bike rental places at each end of it.

Keen cyclists, who love to put in lengthy days in the bike saddle, pass through incredible landscapes and bed down in quaint towns, take on the Sunshine Coast Vancouver Island Circle Tour. With panniers bulging, you catch the ferry from Horseshoe Bay in West Vancouver to Langdale on the Sunshine Coast. The latter is a bucolic, green belt along BC’s west coast that can only be reached by ferry.

Departing the ferry, it is a long uphill slog; even though you’ve only had a 40-minute voyage, you may wish to detour into Lower Gibsons, a pretty waterfront town made famous by the Beachcombers television series. Or you may choose to keep traveling as you are at the beginning of a 250 some kilometer journey that, for most cyclists, is at least a five-day trip. After all, you don’t want to rush through the sleepy towns and tranquil bays.

From Gibsons, pedal on to Roberts Creek – another detour possibility or perhaps to camp out in Roberts Creek Provincial Park. (The Sunshine Coast has more than 100 B&Bs and small inns to choose from as well as camp grounds.) Sechelt, the largest and busiest town on the Coast is an ideal place to stretch your legs and chow down, perhaps at the neighbourhood Italian — The Old Boot.

From here, the highway (yes, there are hills), weaves through rainforest, tiny communities that boast marinas, and gives glimpses of the great Pacific Ocean on your left. It is about 84 km to Earl’s Cove where you hop another ferry to Powell River. This bustling oceanfront town is an ideal place to spend some time, stretch your legs in a park, stroll some galleries and perhaps spend the night before taking a ferry across the Strait of Georgia to Comox on Vancouver Island.

Pedal south through the picturesque Comox Valley, to the pretty oceanside towns of Qualicum Beach and Parksville. Stay at a resort, walk a beach, book a whale watching tour – there are endless add-ons to your bike trip along this route. About 84 km later, you arrive in Nanaimo, a busy city with a trendy waterfront scene.

To complete your tour, spend another day cycling to Victoria to enjoy the capital city and then, from nearby Sydney, take BC Ferries back to Vancouver.

Judi Lees is a BC-based Travel writer and a long time contributor to Travel to Wellness.

Kayaking the Gulf Islands of BC 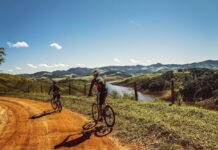 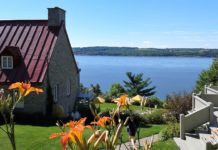 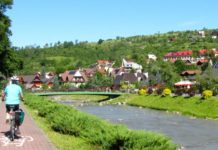 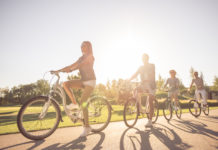