Located on Canada’s East Coast, Newfoundland & Labrador are clean, green and pristine. The province’s rugged seacoast, inland fjords, singular rock formations and spectacular vistas combined with an abundance of outdoor fitness adventure is what draws the wellness-minded traveler to the eastern-most part of Canada. 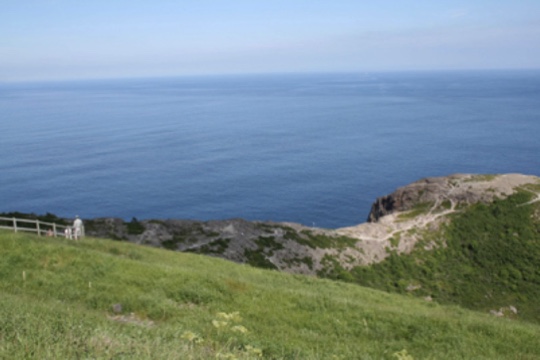 • Newfoundland has its very own time zone. 1.5 hours ahead of Eastern Time.

• June and July are the best months to see icebergs.

• The best time to see whales is from June through early fall. Ed English of Linkum Tours gives us the inside scoop of types of whales and best places to view.

• Cape Spear, Newfoundland, the most easterly point in North America and Cape St. Mary’s is home to one of the world’s largest seabird colonies.

• Newfoundland has one of the largest populations of moose anywhere and the highest concentration may be in Gros Morne National Park.

A story on our hike in Gros Morne National Park

If you’re looking for an urban workout for thighs and glutes, look no further than St. John’s, Newfoundland. The city streets are as hilly as you’ll find anywhere in Canada – plus the North Head Trail is accessible from Signal Hill located within walking distance of downtown St. John’s. Many of the city streets are lined with colourful traditional-style homes that locals call “jelly bean rowhouses” due to their brightly painted exteriors. According to one friendly and chatty taxi driver, the use of colour dates back to the early fishermen who wanted to recognize their individual houses – since the architecture was pretty much the same – when they got off their boats.

The island of Newfoundland is home to the country’s non-official, second “distinct culture.” The first, of course, being the French Canadian culture. Newfoundland has its own culture, own unique music, “salt box” architecture, time zone and its own dialect which can vary considerable from one pocket of the province to another.

What the wellness-minded traveller will most enjoy in Newfoundland is dramatic outdoor venues. The wow-factor lies in this province’s incredibly scenic trails and waterways from which you can see whales breach and blow and watch icebergs float by. Even seasoned hikers and kayakers will be most impressed. Except for the lack of Rocky Mountains, the scenery is as dramatic as what you find in B.C.

A mix of rugged and refined, Newfoundland & Labrador offer an ideal destination for travelers seeking some hard days and soft nights.

According to Ed English owner of Linkum Tours, the entire coastline of Newfoundland hosts a variety of whales throughout the year, but for those seeking certain species there are special times and locations where viewing is peak. The northern tip of Newfoundland is strategically located at the mouth of the Strait of Belle Isle. This strait acts as a “conveyor belt” of fish moving between the Gulf of St. Lawrence and the Atlantic Ocean. Many bird and whale species take advantage of this, spending considerable time around the tip of the Northern Peninsula near L’Anse aux Meadows and Quirpon Island. Humpbacks are very common and favourites of viewers due to their spectacular tail displays. Minke are also plentiful and other species such as Orca from Labrador come from mid-July onward to visit these northern waters.

There are about 26 species of whales and dolphins that can be seen but the most common are humpback, minke, orca, fin, and white sided dolphins. They start to arrive in early June and their numbers build throughout the month. The humpbacks and minke are residents for the entire summer and early fall. I had a guest from Australia paddling 30 feet from humpback whales on Sept 8th. We left the dock and were with humpbacks three minutes later. The other factor that makes Quirpon Island ideal for watching is that the water at our rocks is immediately 200 feet deep. The whales drive the fish against these underwater cliffs and surface literally at your fingertips. The Labrador Current also turns our cove into a gigantic eddy which is popular for fish. The whales know this so they herd the fish into the cove and then engulf them by our dock while guests stand a metre away, taking pictures not only of the whales and seals chasing the fish but also the schools of capelin, herring and mackerel themselves. For more info: http://linkumtours.com