If you‘re looking for a luxury wellness experience in the bosom of nature, put Fairmont Mayakoba on your short list.  Story and photos by Anne Dimon 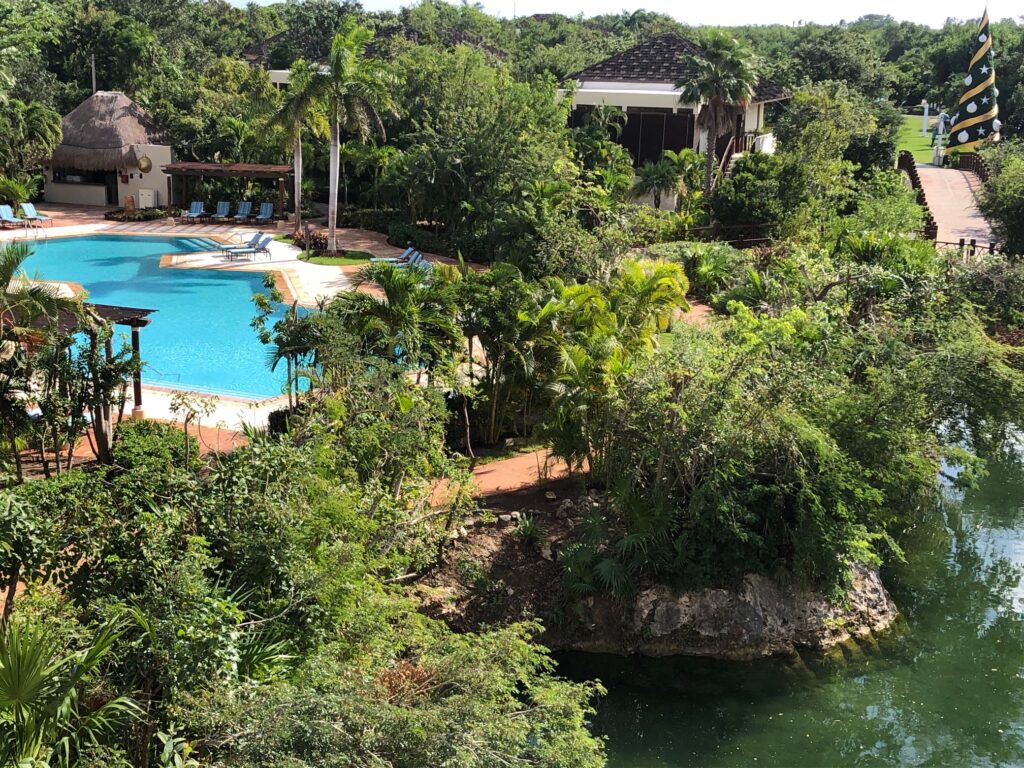 As a journalist, I visited the iconic hotel back in 2006 when it first opened, and my most recent stay (as a guest of Fairmont), is my first return visit since then. In 2006, I’d already been a travel writer and industry journalist for about 10 years, and back then Fairmont Mayakoba was one of the most memorable properties I had ever visited. Fast forward to 2021 and so many years later, it lived up to all my expectations. And, with the multi-million-dollar renovation currently underway – it can only get better!

Located a 30-minute drive from Cancun airport to the Riviera Maya, Mayakoba is a 620-acres resort property divided into two sections. On one side of the road, Mayakoba is home to four luxury resorts including the iconic Fairmont Mayakoba. On the other side of the road just across from the resort, Silvia Ferrar, Fairmont Mayakoba’s Director of Marketing, tells me the owners of Mayakoba are building a complete town.

The Mayan word “mayakoba” means “village that is over the water” and just as the word denotes, Mayakoba sits above underground rivers, and among mangroves, canals, cenotes and tropical forest. The network of paved roads, paths and two-and-a-half miles of walking/cycling trails that line the mangrove canals are the natural assets that sets Mayakoba apart from other resort areas. Also part of the property, an estimated 143 acres of mangroves provide a protected habitat for wildlife. In acknowledgement of their preservation efforts, Mayakoba has been awarded a number of sustainable and responsible tourism awards.

The Fairmont Mayakoba, the first of the current four resorts to open on this expansive property, is spread out across 98 acres. It’s a great location to walk, run, cycle (bicycles are free for guests to use throughout the stay) along paths shared by golf carts as they shuttle guests around the massive property between restaurants, the spa, the beach and other facilities.

The multi-million-dollar renovation, currently in the works, is expected to be unveiled in the fourth quarter of 2022. It will include an upgrade to all 401 guests, three restaurants, coffee shop, public spaces, the onsite spa, plus the addition of a Trattoria.  A bit about the language and local etiquette in Mexico

Each of five Fairmont restaurants offers vegan, vegetarian and gluten-free options. On our first night there, my husband and I decided to try the beachfront Playita restaurant. Upon arrival we were asked if we had a reservation and, surprisingly, if either of us had any allergies. How unique and considerate I thought. In my many years as a travel writer I have not encountered a restaurant welcome that asked about allergies.

Wellness Directory Jessica Lonngi first joined Fairmont back in December 2006 and over the years has held numerous positions including Spa Coordinator, Spa Supervisor, Spa Manager, Assistant Spa Director and Spa Director. Now, as Wellness Director she is in charge of the Willow Stream Spa, the Kids Club plus Water Sports. She tells me that the 20-treatment room Willow Stream Spa will, as part of the property renovation, will include a name change to the Fairmont Spa brand. The renovation will also include an additional Couple’s Suite plus an even larger retail area. In the Fairmont style of supporting and giving back to the locally community, the current retail area offers many locally-produced products, for instance, jewelry made from dried pines leaves by the women of Jalisco. “The organic crafts help support their way of living,” says Lonngi.

Another show of support for Mexican-produced products is that local skin care products are being used in spa treatments, plus available for purchase. “Mexican cosmetological lines have reached the level of quality that American and European lines have,” points out Lonngi. “We are carrying Mexican skin care lines such as Agave Spa, and clients are loving them.”  The retail shop also includes locally-made gym clothing. “We’ve carried the Alasolas line for about a year now, and it has become very popular with guests. “

Open every day of the year, the spa is also home to two swimming pools and Lonngi welcomes guests to “spend the entire day with us enjoying the facilities including the pools and hydro therapy facilities.”

As with most Willow Stream Spas, there is a full menu of services but it is the “locally-inspired treatments that have been the most popular since the spa opened,” says Lonngi.  Both ladies’ and men’s lounges open up to the jungle. “It’s so very important for us to connect with Nature. Here, even the hydro therapy area is open to the sky,” she says. I learn that the spa itself will be closed for about six months during the reno but that spa treatments will be made available to guests in other areas of the resorts such as in a beach palapa or in a guest room, upon request.

One of the treatments that is a nod to the local culture is called Honey in the Heart. The 60-minute treatment includes a honey body mask to hydrate the skin, a “rainforest” rinse under a Vichy shower, followed by a relaxing massage. In true Fairmont fashion, the resort is also doing their part to help save local bees. Fairmont Mayakoba is home to about 600 bees who have made their “hives” in logs hanging in a private area of the spa.  On Global Wellness Day (held annually on the 21st of June), the honey from these onsite hives is harvested by a local shaman. This, explains Lonngi, is in keeping with a local Maya tradition.

It’s been roughly three years since my last spa visit. That seems like a very long time for someone who, as a journalist, once covered the spa scene on a regular basis. What a treat to make my re-entry into the spa world at this particular spa, one that I visited and wrote about back when it first opened. At first, I was reluctant to accept the kind offer of a spa treatment, but Lonngi and Ferrer convinced me, and I am so grateful to them that they did.

Waxing Moon is a 90-min treatment inspired by the Mayas, whose culture was very connected to the various phases of the moon. At the skilled hands of therapist Monserrat, I was transported to another time. I even fell asleep on the table which as all spa-goers know is the ultimate gift of a soothing massage. It’s the perfect indication that a massage has been ultimately relaxing. I’d forgotten how totally relaxing a massage in the hands of a true professional therapist could actually be. Don’t think of it as pampering. Think of it as self-care.

Daily activities at Fairmont Mayakoba include a combination of complimentary and fee-based. One of the “must do” activities available to guests on a complimentary basis is a guided boat tour around the mangrove canals.

The electric boat – I’m told it’s called a Duffy – is operator by a staff member. Our Duffy tour was guided by Juan Carlos who is also a naturalist. Along the peaceful journey he points out a very large termite nest nestle in the trees, iguanas lazing in the sun, Cormorants, along with Egrits and Boat-Billed Herons flying about or perched in the mangrove forests that line the canals. We learn that both male and females of one jet black heron species (called ANIGA) have blue eyes during mating season. As the boat glides along we suddenly notice two long, slim crocodiles smoothly and ever-so-quietly sailing through the dark green waters of the canal.  “They have a pretty good life,” Juan volunteers, “they start off at a luxury resort then as soon as they reach six feet in length they are shipped off to a crocodile sanctuary.”

The journey is slow and peaceful and allows for the type of enriching in-the-moment experience that should be part of our everyday lives, not just when we are traveling.

The Mayakoba resort also offers each guest a complimentary visit to a cenote. From Juan Carlos, I learned that in this area of Mexico there are more than 6,000 cenotes.

A few activities that come with a fee include archery lessons, guided kayak canal tours and daily cooking classes. The meticulously groomed El Camaleon, a PGA Golf Course designed by Greg Norman is owned and managed by the owners of Mayakoba, and Fairmont guests (along with the guests of other Mayakoba hotels) have full access at seasonal rates.

If you decide you never want to leave Mayakoba, there’s good news. The resort also offers residences. A section of the resort known as Fairmont Heritage Place currently offers 22 three -and four-bedroom units and the number of units will increase to 72 by the end of 2022. Ferrer tells me that both fully-owned and shared options are available.

For a wellness vacation, put Fairmont Mayakoba on your short list.

Surrounded by the peace and quiet of the mangrove forests, Fairmont Mayakoba is an ideal spot to escape, relax, rejuvenate and return to daily life refreshed and refocused.