Barcelona is one of the most spectacular city’s in the world. The architecture, the food, and the 24-hour “hip vibe” of a major metropolis on the Mediterranean. But for the wellness-minded traveler, the hustle and bustle can be too much.

Enter upscale hotel chain Fairmont, famous for its five-star experiences that cater to the discerning traveler. At the iconic Barcelona property, Fairmont has reinvented the urban retreat experience just six miles from the hectic City Centre.

Recently voted #1 hotel in Barcelona by Condé Nast Traveler Readers’ Choice awards, I had to check it out for myself to see what all the fuss was about.

Named for the Spanish king who reigned from 1975-2014. Fairmont Rey Juan Carlos 1 was built for the 1992 summer Olympics and remains an architectural gem reigning over twenty-five thousand square meters of impressive manicured grounds. Managed by  Fairmont since 2014, the esteemed hotel chain has overseen several major investments in the five-star property, the latest includes extensive room, restaurant and lobby renovations late last year.

The ultra-chic lobby bar and restaurant are cleverly designed to feel cozy and inviting. The contemporary drop lighting, impressive to the eye, as if it were a shower of lights which serve to give an intimate feel despite being in the center of the hotel’s impressive 16-storey open lobby.

For the fitness enthusiast and wellness seeker, the options are endless. The on-site gym and spa are the largest hotel wellness space I’ve ever seen.  Admittedly, a bit dated, spa renovations are slated in the near future.

Additionally, the hotel offers its guests exclusive access to a popular adjoining athletic club. David Lloyd Clubs are Europe’s premier racquets and fitness providers.  Founded by, and named after the former British tennis champ form the 1970s. The hotel has a partnership for guests to use the state-of-the art gym, take a yoga class, as well as use one of a dozen tennis courts. The tennis and squash combo – called Padel – is  the sport of choice on these courts.

The hotel is adjacent to the exclusive “Real Club de Polo, a stunning polo facility that hosts regular matches and tournaments. Again, in an exclusive arrangement, the Fairmont concierge can arrange horseback riding for guests.

The hotel is a favorite of soccer fans because it’s just a short walk from Camp Nou, a local sports shrine and home to Barcelona’s soccer team, Barcelona FC.  Apparently, it’s the second most visited city site by tourists after Gaudi’s unfinished church La Sagrada Familia. The Fairmont’s concierge can arrange tickets should guests want to join the locals as they cheer on the city’s favorite sports team. No matter your sport of choice, the Fairmont Barcelona has you covered.

Pools and Gardens serve up Peace and Quiet

But it’s the hotel’s manicured grounds and two outdoor swimming pools that are most impressive.

There’s also an outdoor bar/lounge and restaurant. Again, expansive grounds and gardens which would be impossible downtown based on the size alone.  The Fairmont Rey Juan Carlos 1 is located in one of the most affluent neighborhoods uptown. You can jump on the city’s metro with a stop just outside the hotel, and 20 minutes later you’re are in the popular Ramblas district where you’ll find all the great sites and shopping and the infamous “hustle and bustle” Barcelona is famous for.

One of several onsite restaurants, The Terrace takes great pride in bringing nature indoors for guests to enjoy year-round. And, at the hotel’s B.24 restaurant, dining options go well beyond Spanish cuisine – from the “catch of the day” fish, to a new menu for autumn and winter with a focus on vegetarian and vegan dishes. 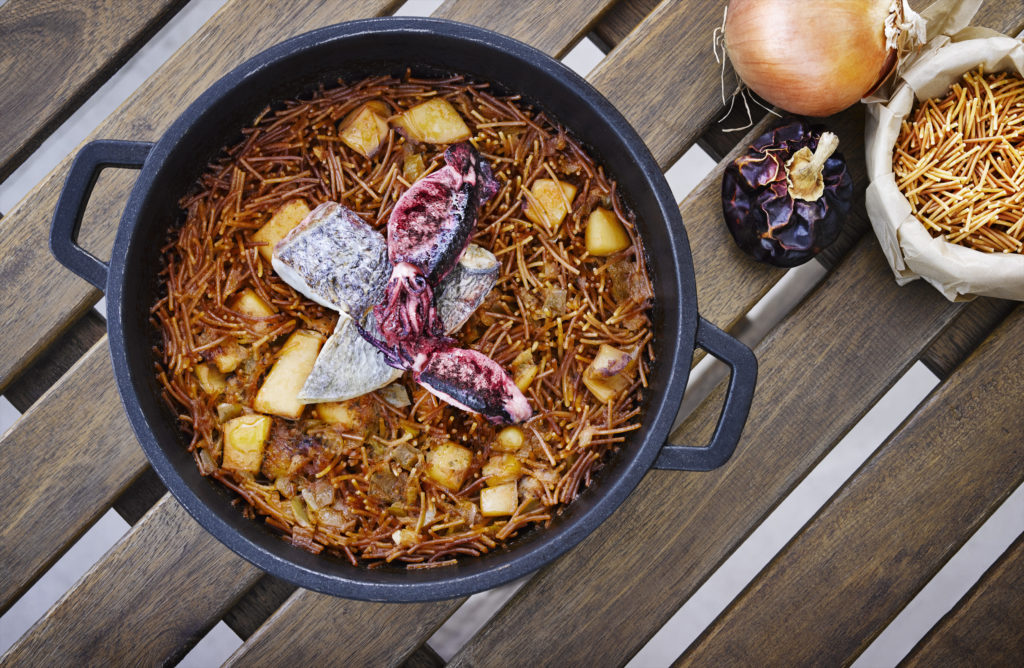 The revamped menu emphasizes the use of local and seasonal wherever possible. Executive Chef Claudio Aguirre is focused on creating new vegan and vegetarian dishes which combine haute cuisine with the best local products. Think dishes such as  Seaweed Salad, Pumpkin Rice with orange, green asparagus and pine nuts, and the Aubuergine steak with tomatoes and wild mushrooms.  Gluten-free options are also available. We were fortunate to be hosted by the marketing manager after a personal tour of the suites and grounds. In a city known for its cuisine, this menu doesn’t disappoint.

For the wellness-minded Conference Goer

The The Fairmont Rey Juan Carlos 1 is also a popular destination for conferences because of its easy access to the adjoining Palau de Congressos de Catalunya, which can host up to 4,000 participants.  With multiple conference rooms and facilities on the same property, you can see why this Fairmont Barcelo property has become a popular hotel with business travelers, who more and more seek easy access to wellness while on the road.

When looking for a hotel in Barcelona the options are endless.  Even narrowing it down to four and five-star properties can be overwhelming, just like the city itself.  But, the resort-like experience at Fairmont Rey Juan Carols 1 is close to the hustle and bustle, yet seemingly a world away, perfect for today’s wellness traveler.

Leslie Roberts is the Editor at Large for Travel to Wellness.  Connect with him on Twitter

Other stories by Leslie: