City running tours have been around for several years now but running tours available to hotel guests free of charge is not so common. Four Seasons hotels in several cities around the world offer scenic jogging, walking or hiking tours all complimentary for guests.

Here are five destinations where you can “run around” with Four Seasons:

Four Seasons Hotel George V, Paris: Runners know the best way to see a city is while it sleeps – that’s why two employees at the famed Hotel created the Cultural Jogging tour, a 9 kilometre (5.5 mile) run that takes place every Tuesday at sunrise. From the Louvre to the River Seine, the route is designed to give you a view of the City of Lights’ most spectacular landmarks, which your guides will point out along the way.

Four Seasons Hotel Prague: If your travels take you to Prague instead of Paris, you’re still in luck. Two of the Hotel’s knowledgeable concierges, Petr and Stanislav, lead a 40- or 60-minute run through the city’s historic streets every Wednesday morning. Starting out from the Hotel’s scenic location on the Vltava River, you’ll follow a classic sightseeing route that’ll allow you to get up close and personal with sights such as Vysehrad Rock and Kampa Island.

Four Seasons Hotel Vancouver: The biggest city in British Columbia is known for its vast mountain ranges, expansive beaches and lush vegetation. But did you know there’s a rainforest within the city limits, too? As part of the property’s commitment to health and wellness, you can now take the Hotel Manager out for a 6:00 am jog through the rainforest. What better way to start your day on Canada’s stunning west coast?

Four Seasons Resort Scottsdale at Troon North: Though it might be a bit of an uphill battle to get you out of a reclined position in your adobe casita, there’s one activity worth your while. The weekly guided fitness hike to Pinnacle Peak Park will get your blood pumping and allow you to explore the rugged landscape. Don’t miss your chance to enjoy ‘peak’ views of the Sonoran Desert, including those iconic, multi-armed saguaro cacti.

Four Seasons Hotel Washington, DC: Get ready for a ‘monumental’ morning run in America’s capital with the Hotel’s new Run My City challenge. Lace up your sneakers and let management lead you on a route that takes you past most of the city’s key monuments, from the Lincoln Memorial to the White House and Arlington Cemetary. When you return from your moving history lesson, re-fuel with a complimentary gluten-free Superfood muffin and Green Goddess juice. 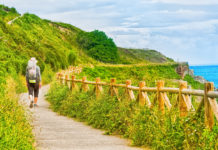 Walking Vacations: A pilgrimage on the Camino in Spain