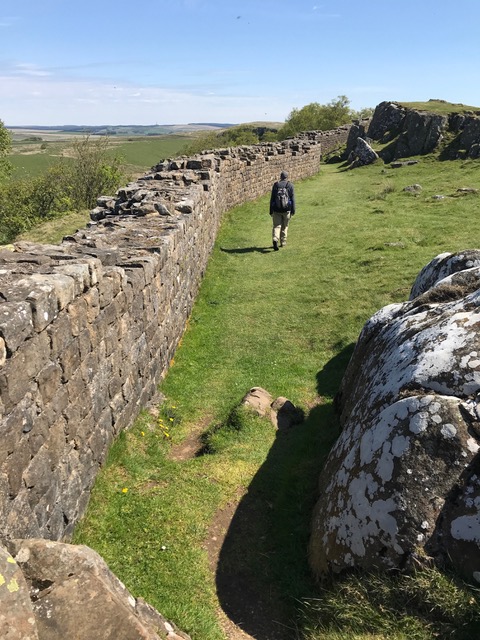 There is something about a wall that pleases the mind.  It sets a clear boundary.  Though it may define danger on one side, it promises safety on the other.  Perhaps that ancient comfort is what drew my brother and I to walk the length of Hadrian’s Wall across northern England one fine week in May.

The Roman Empire extended from Rome to an area between Carlisle and Newcastle in ancient Britannia, for nearly four hundred years.  Hadrian, Emperor of Rome between 117 and 138 A.D., spent more than half of his reign in a saddle, touring the extensive boundaries of his empire, strengthening its fortifications. The path he rode through Britannia back then, laying out the line that would give rise to his wall, separating who they referred to as the “heathens of Scotland” from the citizens of Rome, is the path we walked over five days. 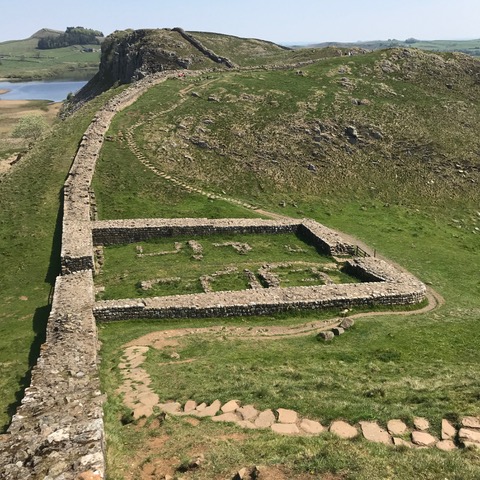 We booked a self-guided walking tour with Contours, our go-to walking holiday agency in the United Kingdom.  They make all your reservations at modest bed and breakfast places along the way, and arrange transfer of your luggage from one to the next.  They supply maps, a guidebook, and nowadays, a set of GPS coordinates for your phone. You supply the energy to walk from 8 to 15 miles per day – rain or shine – over ancient footpaths, and public rights of way, that are as common in Europe as they are rare in the United States. You carry a day pack with lunch (packed that morning by your previous night’s host) along with rain gear, water and little else.  After breakfast, you start out.  At day’s end, you arrive at your new lodging, where you’ll find your suitcase waiting in your room.  It is the world’s simplest – and to my mind, the most glorious – holiday.

Many walkers walk from sea to sea, which adds an extra day on either end of the walk. We learned from walkers’ reviews that those miles traverse urban and suburban areas that don’t uplift the soul, so we skipped them, and just walked the bucolic 55-mile section known as “Best of Hadrian’s Wall.”  From what walkers we met told us, it was an excellent choice.  A well-known guide book apparently takes walkers from east to west, so most walkers travel in that direction.  Our trusty walkers’ reviews said that the prevailing winds move from west to east, and so, not being averse to a bit of help from our rear, and happy to go against traffic, we walked toward the rising sun.  For us, it was another excellent choice.

We took a train from London to Carlisle, and gave ourselves a full day to enjoy that town’s celebrated history.  The Carlisle Castle is renowned as the “most besieged” place in England, a sought-after prize in England and Scotland’s border wars.  We enjoyed the town’s pedestrian zone and gorgeous cathedral.  Our bed and breakfast was friendly but noisy, and on our second morning, we were ready to leave.

Our first day’s walk took us out of town, immediately immersing us into parkland along a river, and on through rolling fields, crowded with sheep. 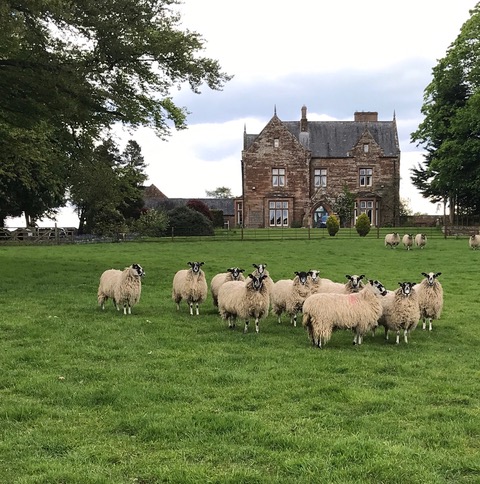 We saw a running grassy berm and depression that gave us our earliest hint of the earthworks built along Hadrian’s Wall.  As we had been warned, the pragmatism of centuries of English farmers has found new uses for almost all of the Wall’s well-cut stones, and you’ll see far more of them in the well-built farmhouses and walls you pass than in remnants of the Wall itself.

Our first night’s stay was at a fine country manor – the Oakwood Park Hotel – set on broad lawns sprinkled with sheep, cows, and mature trees.  We enjoyed our welcome tea and biscuits in the parlor, and then strolled on the grounds until dinner, which featured a dazzling menu of 24 delicious homemade dishes. After a quiet sleep, and a massive breakfast, we set out again.

Our second day’s walk reawakened our awe of the English reverence for land, as we passed through beautiful fields and tended woodlands, and by gorgeous gardens and gracious stone walls.  We noted small sheds along the trail offering snacks and drinks, with only an “honesty box” for payment.  Grateful walkers had posted notes in thanks.  We visited the picturesque Lanercost Priory ruins just a short walk off the trail.  And at long last, sections of the ancient Wall emerged from the ground like the spine of a massive underground serpent.  Beyond them, we came to the first of several Roman forts and encampments built along the Wall, the ancient fort at Birdoswald.

Our third day’s walk took us up, across, and down seven crags, with views to the north and south, along remnants of the Wall and its watchtowers.  A 3D video of a virtual Wall at the Carvoran Roman Army Museum helped us picture its splendor in its day.  George Martin, creator of the Game of Thrones epic, was inspired by his visits to Hadrian’s Wall to imagine his fabled Wall of the North and its lonely Night Watch. 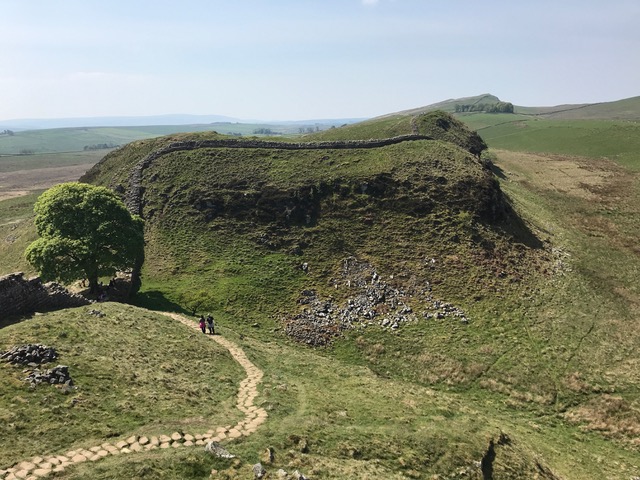 That night we supped at the Twice Brewed Inn, which claims to be the site of continuous brewing since 1464.  Next to that proud sign is one that says, “In Loving Memory of a Sunny Day on Hadrian’s Wall,” but remarkably, all our days were sunny. And, why Twice Brewed?  The English general pursuing Bonnie Prince Charlie exclaimed that the tavern’s ale was too weak to fortify his hard-charging men, and demanded, “Brew it again!”

We paused from our walking on our fourth day to take a local bus two miles off the trail to Vindolandia, one of the most remarkable Roman fort sites along the Wall, featuring excellent interpretation, excavation, and partial restoration.  After a quick ride back, we walked the escarpments from Twice Brewed to Housesteads, thought to be the prettiest miles of the whole trail.

Our fifth day was unremarkable, as the trail mostly followed a busy rural highway, though we walked through fields of bright yellow rapeseed beside.  There was no hint of the once grand Wall, and we were glad when we reached our farmstead at day’s end.

After sleeping with sheep just outside our bedroom window, we arranged a transfer to our train station, and made our return from Newcastle to London.

A long-distance walk like this one along public footpaths in Europe offers a perfect blend of outdoor exercise, cultural history, modest lodging, and local dining, all at a surprisingly affordable price. But mostly, however, it provides a rare chance to slow down and enjoy nature, day after day, at the very pleasant, and very human, pace of walking.

Jay Vogt is a long time contributor to Travel to Wellness.  When he is not traveling, Jay loves consulting, and finding the quirky and the beautiful. You can connect with him on Instagram

A pilgrimage on the Camino in Spain

And, other stories on fitness adventures around the world 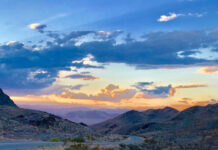 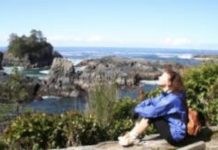 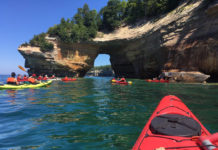 Five Top Places to Kayak in the U.S.