Story and photos by Rob Squire

While I’ve traveled quite a bit over the years, I haven’t spent very much time in South America other than a two-week trip to the Patagonia region of Argentina back in 2017.  A couple of years later, I decided to visit Peru, a country that stirs up mental images of Machu Picchu and women dressed in colorful garb. 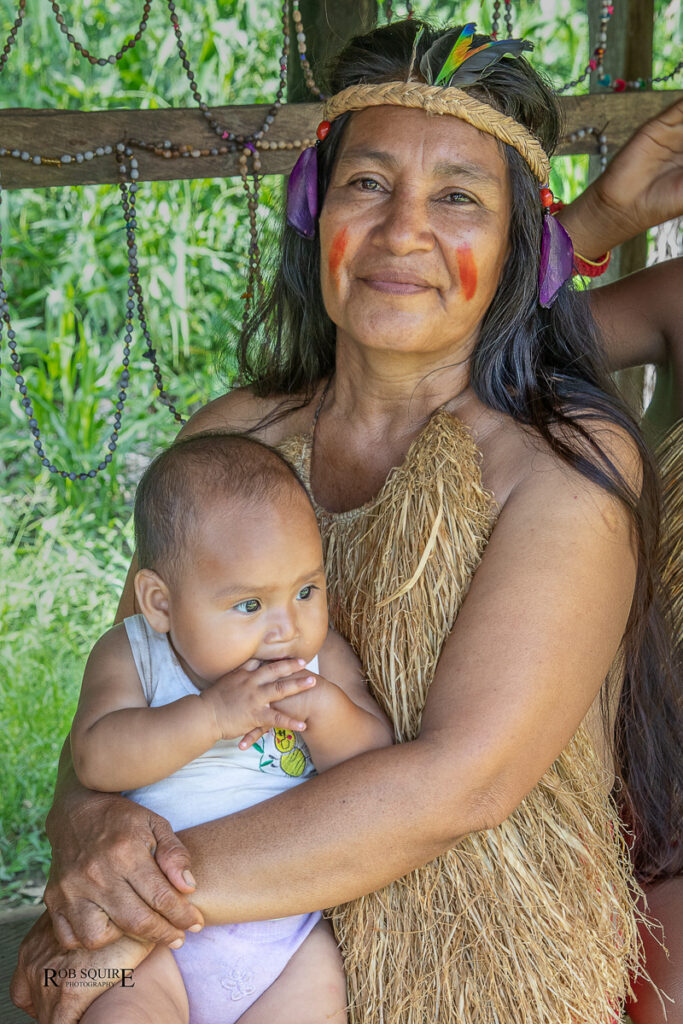 Over a period of three weeks, I traveled all over this fascinating country, and Peru brought me varied and delightful experiences. During a week on the Amazon River, I spent some time traveling the side waters off the main river seeing a variety of wildlife.  Fishing for Piranha was a unique experience (I used chunks of beef for bait) and eating the Catch of the Day (the Piranha I had hooked) for dinner later that evening was a treat. They tasted – well – like fish. Much of the Amazon is westernized, but not all of it. The Yagua people belong to an indigenous tribe that lives on the river in much the same way as it has for hundreds of years.  Of course, the people have adapted with changing times to a certain extent, but most can’t sign their own name and some cannot even tell you when they were born. 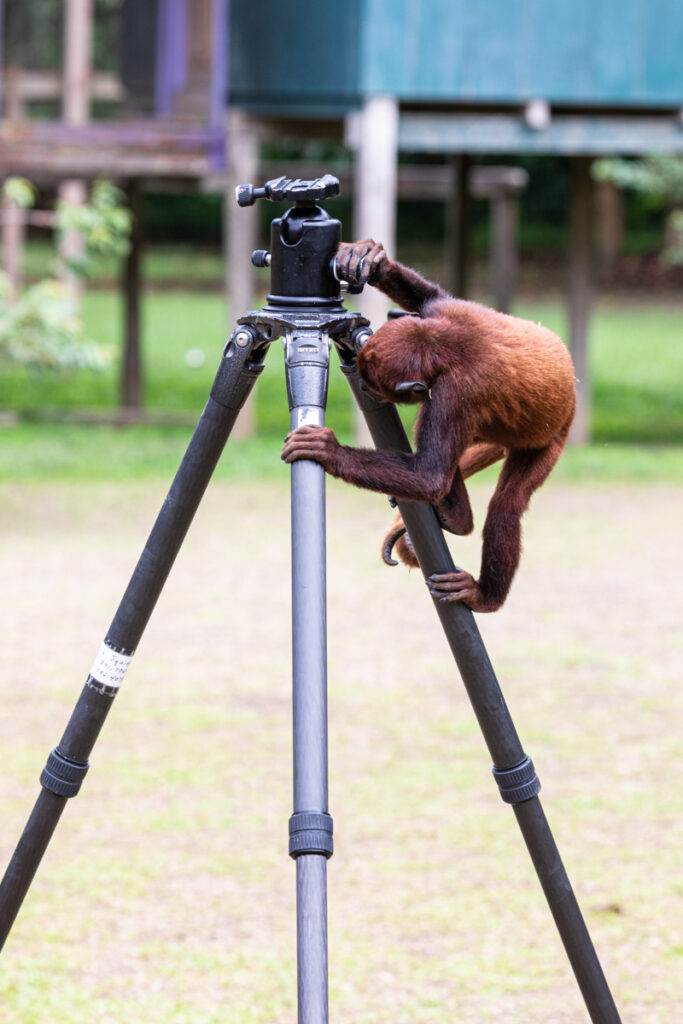 Isla de Los Monos (Monkey Island) is an 1,100 acre island sanctuary dedicated to saving several species of monkeys, most of which were confiscated from people keeping them illegally as pets.  As soon as I got out of the boat, I found myself in a tug of war with a mischievous Woolly monkey over my camera pack, and later these curious and playful primates were completely fascinated with my tripod.  It was clear that I had to be on my toes every minute or they would have made off with all of my camera equipment. 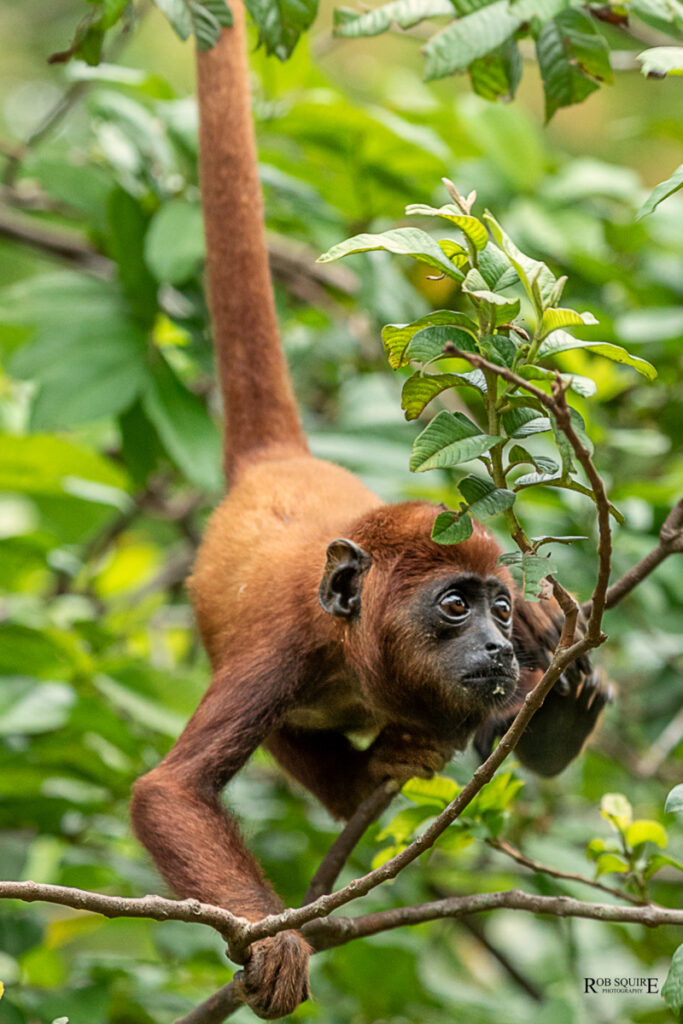 Monkeys are always fun, and one two-year-old Woolly monkey named Sam took a liking to me.  At first, he just hugged my ankle, but in no time at all, he climbed up my pant leg and planted himself on my shoulders where he stayed for most of my visit.These guys were simply unbelievably cute and made wonderful subjects for my camera as this Howler Monkey did.  Most of the rest of my stay on the Amazon was spent doing my best to avoid being consumed by the primary local man-eating predator – mosquitoes.

Wherever I visit, I love making my way through local markets.  They’re a cacophony of sights, sounds – and sometimes smells.  I think a person can learn a lot about the local culture and the people that live there just by spending a little time in one.  You find slabs of meat and organs from various animals hanging from hooks, along with fruits, vegetables, prepared foods and just about anything else that you can name. 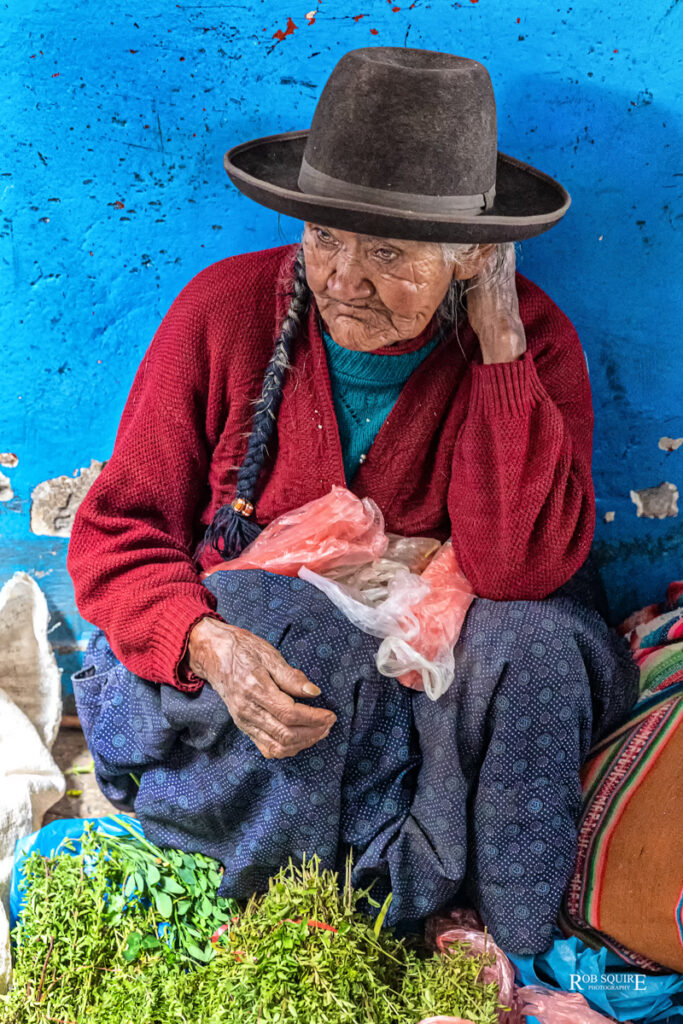 I spent a couple of hours wandering around one bustling market in the town of Colca near the Sacred Valley of Southern Peru.  I tried to strike up some conversations, but it was difficult to find someone who spoke English fluently enough to carry on much of a discussion.

This woman was just sitting in a narrow hallway waiting for a customer for her herbs.  After receiving her permission and paying her a few sols (the unit of currency in Peru), I had to back up into an adjacent hallway to get far enough from her to get this shot.

Of course, the thing that just about every visitor wants to see while in Peru is Machu Picchu.

There is one place along the path which is the exact spot where every tourist stands to take a shot of the view, and if you’re like me, you’ve probably seen no fewer than 10 zillion pictures that all look the same. 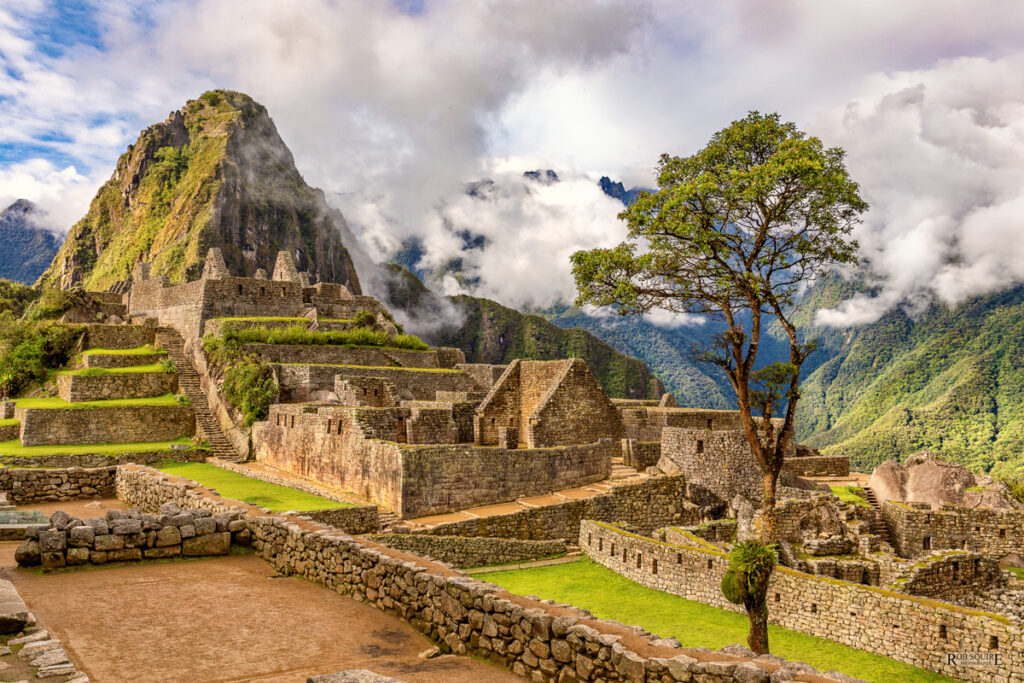 Of course I took one, but I also kept looking for a slightly different perspective of it. No matter where you shoot it from, it’s a magnificent sight!

This country has so much to offer with such a variety of experiences that most any traveler will find something to enjoy.  I was happy that I visited, and I have no doubt that if you decide to go, you will as well.

Photo tip:  Quite often when a person takes a picture of something, they are disappointed in the shot later on.  It turns out to just be an uninteresting picture of – a thing.  Many shots, especially landscapes, are enhanced by having a foreground, a midground and a background.  When I was leaving the monastery in Urubamba, I saw this lime green house with a beautiful backdrop of the Urubamba Mountains, which are a part of the central Andes.  In the photo below, I used an opening in a broken down section of the monastery’s old original stone fence for a foreground, with the colorful house as the midground and the mountains as the background.  Try it some time. 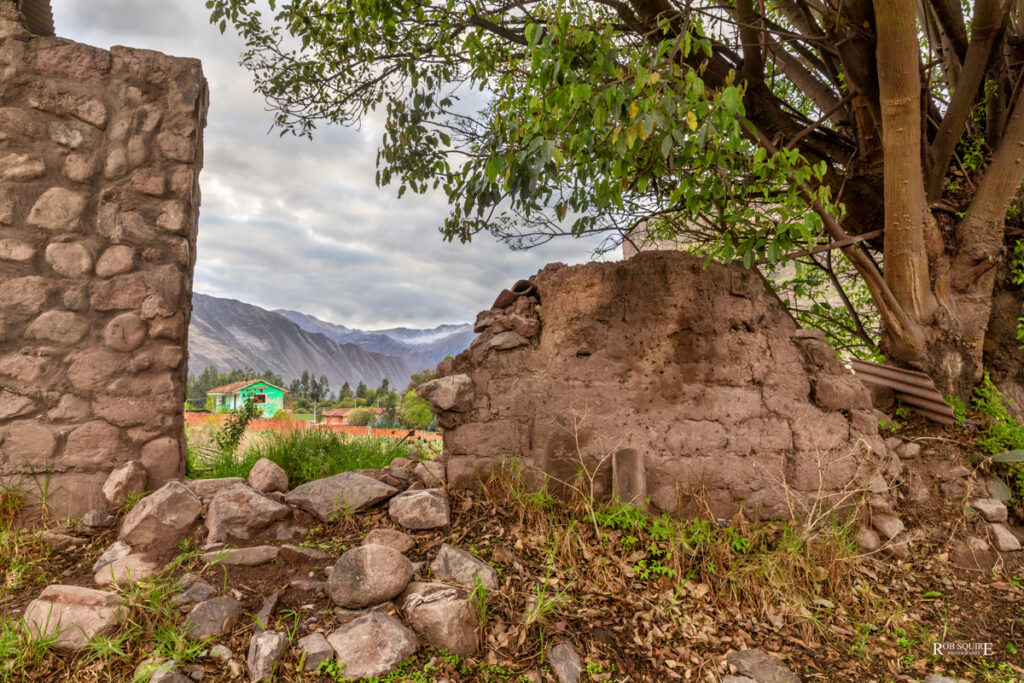 Rob Squire is a professional travel photographer who has visited over forty countries. When not traveling the world, he is based in Denver, Colorado.  You can see his work by visiting RobSquirePhotography.com or by “liking” his Facebook page.