Immortalized in books by Lucy Maude Montgomery as the home of Anne of Green Gables, Canada’s most diminutive province is considered one of the country’s top golf destinations and, as with all the Atlantic provinces, the seafood culinary experience is a big draw. Prince Edward Island lobster, oysters and mussels are world famous.

Winding trails linking rural communities, waterways for kayaking and the peaceful, country quiet that envelopes most of the island are a few features the wellness-minded traveler will find on Prince Edward Island. The 300 km (about 186 miles) Confederation Trail, for instance, is considered one of the finest cycling paths in the country.

• Charlottetown and Summerside are the main cities.

• The soil is red (think adobe red) due to heavy content of iron oxide which rusts on exposure to air.

Linked to the mainland by Confederation Bridge (one of the world’s longest continuous multi-span bridges) Canada’s smallest province is as renowned for its lobster and Malpeque oysters as it is for being the home of Lucy Maud Montgomery’s red-headed heroine, Anne of Green Gables. In 2008 the island plans to celebrate the novel’s 100th anniversary of world-wide popularity.

And, yes, the soil on this crescent-shaped island, really is red – adobe red. But you’ll also find golden, sugar sand beaches, dramatic red sandstone cliffs, rolling sand dunes mixed in with hillside pastures, wide open fields and family farms. With scenic ocean-fronts and inspirational vistas, the island offers a leisurely pace of life that is in complete contrast to the urban rush of big cities. Even the cities of Summerside and Charlottown are more like big towns. Single lane highways wind past potato fields, grazing cows, tiny farms, lovely little villages with the mandatory church and beyond that more fields.

Most visitors explore the island during July and August but fall is also a good time to visit.

Where should you stay when visiting Prince Edward Island? 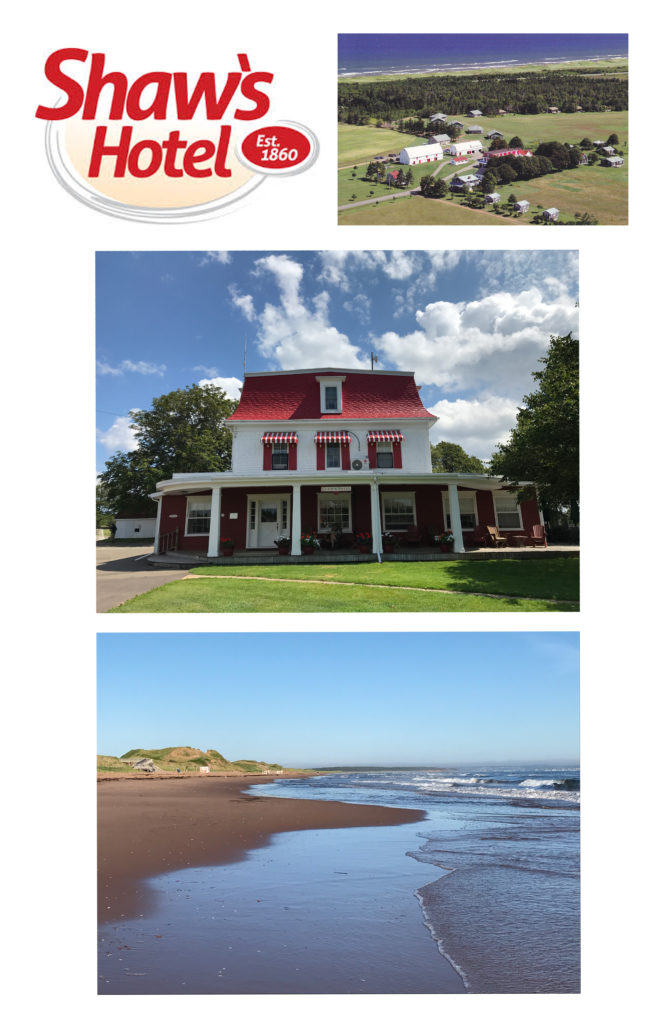 A family-owned business since 1860, Shaw’s Hotel remains a landmark on the North Shore  bordering Prince Edward Island National Park. A five-minute walk to the beach thru a wood shaded lane, the inn is also a designated National Historic Site Of Canada  A 10-minute drive from the airport and just 20 minutes to the capital city of Charlottetown, Shaw’s Hotel offers 15 rooms at the Inn, 10 cottage plus 15 deluxe chalets with up to four bedrooms. Rates start at $135 CA.

Nearby activities include cycling, sea kayaking canoeing, and walks along one of Canada’s ‘best kept secret’ beaches.

Owner/manager Robbie Shaw says, “the moist gentle sea breezes often lead people to comment on how well they slept and it is because of these moist sea breezes that Shaw’s attracted our first customers way back in 1860.”