These days it seems that everyone is visiting Iceland.  Tourism quadrupled from 2010 to 2016 and much of that increase was due to Americans flocking to this mysterious island with a totally unpronounceable language. Icelandic Airlines and Wow Airlines have dramatically increased their flights to and from many major US cities – and they’re pretty cheap when you compare them to flights to and from Europe. As a result, it seems like Reykjavik has become the destination of choice.   Story and photos by Rob Squire

It really is a wonderful country and contrary to its name, it isn’t a barren frozen wasteland.  Quite the opposite, it is green and beautiful in the summer months.  Sure it has a volcanic origin, and you’ll see a lot of black rock.  But there’s still plenty of green to go around and it’s quite beautiful – or so I’m told.  I can only go by what I’ve heard about the summer season, because you see, I went in the winter.  Oh, one more thing.  I’m glad I did. 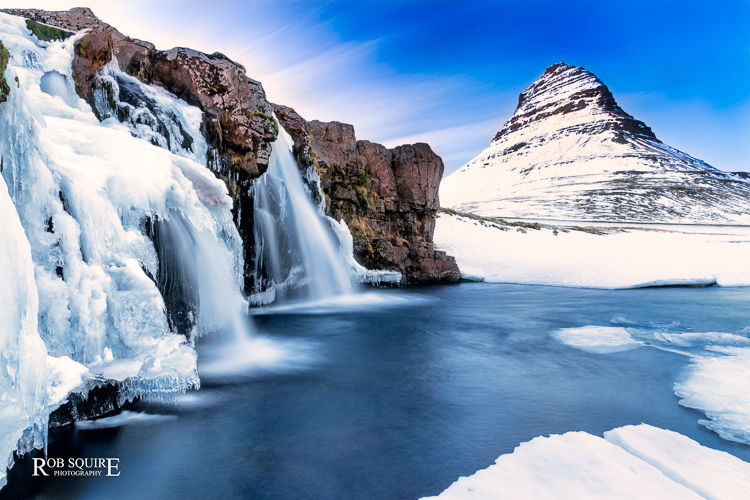 Now before you conclude that anyone who would go to Iceland in the wintertime must have lost his mind, consider this: There truly is beauty in the ice formations, the waterfalls, and the soft white blanket of snow that you only find in the winter months.  Kirkjufell (shown above) is one of the most famous mountains in Iceland, and is gorgeous in the winter.  Jokulsarlon, a glacier-fed lake in the Vatnajokull National Park is a pretty lake with a glacier in the background in the summer.  But in the winter it becomes an iceberg-laden wonderland choked with pieces of ice of every shape and size.  Would you like to explore an ice cave inside a glacier (see below)?  Better go in the winter.  Northern lights?  Winter. Smaller crowds?  Yup, you guessed it – winter. 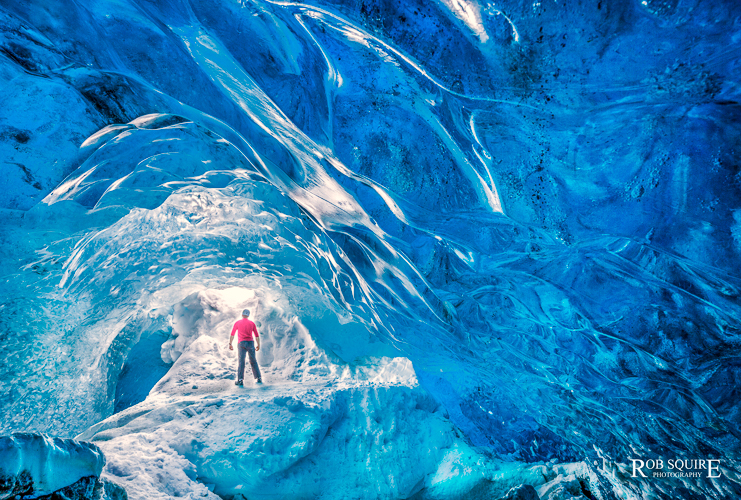 Since Spring and Summer are considered the prime times to visit, you’ll find cheaper hotels, restaurants, car rentals and flights in the winter, not to mention lower tourist crowds. Weather in Iceland isn’t exactly going to be tropical in any month of the year.  The average high temperature in Reykjavik is about 57 degrees in the middle of summer, but the average high only falls to 37 degrees in December and January.  Not exactly toasty, but hardly frigid.  I was there in February and March, and I only occasionally felt really cold, and usually that was when I was taking sunset photographs.

In all fairness, I have to say that Reykjavik is at 64 degrees north latitude, and that means lots of sunshine in the summer and lots of no-sunshine in the winter.  In Feb/March, there are just 9-11 hours of daylight each day so you have to get most of your sightseeing done during those precious day time hours. But on the positive side, that leaves 13-15 hours a day where you might see the Northern Lights.

If I was to sum it all up, I would say that Iceland would probably be a nice trip in the summer time. But it’s an adventure in the winter. I have considered returning so that I could experience a summer in Iceland.  But I’ve pretty much decided that it would be a disappointment after the incredible experience I’ve already had there.

Photo tip:  If you want to get a shot of Kirkjufell like the one I’ve shown above, the most important piece of equipment you can bring isn’t in your camera bag – it’s on your feet.  Buy a good pair of spikes or crampons and wear them.  They’ll keep you completely safe when walking on ice (particularly when you’re on a sheet of ice that is slanting toward the water like I was when I took that shot).

Check out these other stories and photos by Rob