Bhutan has always been a mysterious destination for me.  For many years, tourists weren’t allowed in this country that the world knew little or nothing about.  I heard tales of Tigers Nests, and Kings and Queens, and happiness quotients, and I wondered what it must be like to visit this exotic country.  Finally in 1974, in order to raise revenue, the government opened the country up to tourism using a very measured approach.  Even today, they balance the desire for tourist dollars against the impact that tourism inevitably has on the environment and culture.  Story and photos by Rob Squire

The flight to Paro, Bhutan from Kolkata, India was the beginning of my adventure, as I was treated to indescribably gorgeous views of Mt Everest and much of the Himalayas. The final landing approach takes the airplane into the Paro Valley with less dramatic but equally beautiful views of the colorful steep valley walls on both sides of the airplane.  It was truly the most exciting landing I’ve ever experienced.

The Bhutanese people are among the friendliest I’ve ever had the pleasure of meeting.  Not surprising since the government regularly measures the “Gross National Happiness” of its people along with the normal and more traditional fiscal measure of Gross National Product. 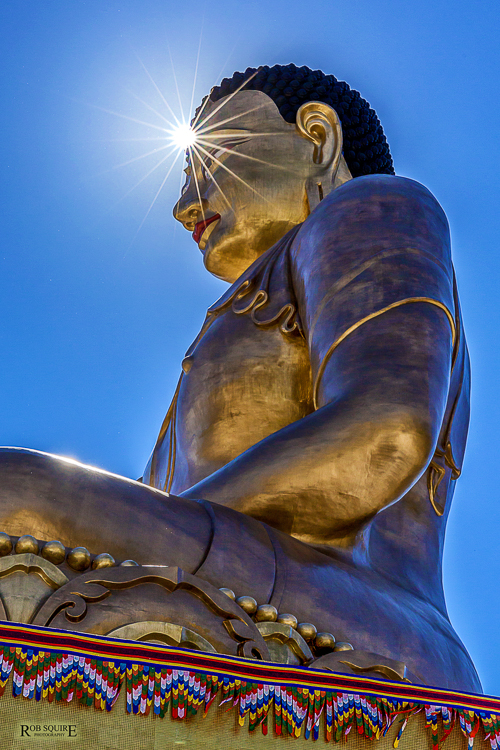 Finding amazing sights isn’t difficult in Bhutan.  The largest statue of a sitting Buddha in the world is in Thimphu.  Dochula Pass, at an elevation of 10,200 feet has 108 memorial stupas honoring the Bhutanese soldiers killed while driving Indian terrorists from their country.  The Punakha Tsong and suspension bridge are beautiful sights to behold.  If you want a unique experience, see the Temple of Fertility in Punakha.  It’s fascinating to see, and is complete with tales of infertility-busting experiences, and crowded with – ummm – phallic visual aids.

Of course, no trip to Bhutan would be complete without a visit to Tiger’s Nest.  According to Buddhist belief, the second Buddha flew to a high mountain near Paro on the back of a Tiger, and spent months meditating in a cave. This made the cave a very holy place to them, and years later in the seventeenth century, they built a temple on the site.  It’s a bit of a hike to get there.  The well-maintained trail is only 3 miles long but it’s a bit on the steep side.  The views of this temple, built on the very side of a mountain, are well worth the hike. 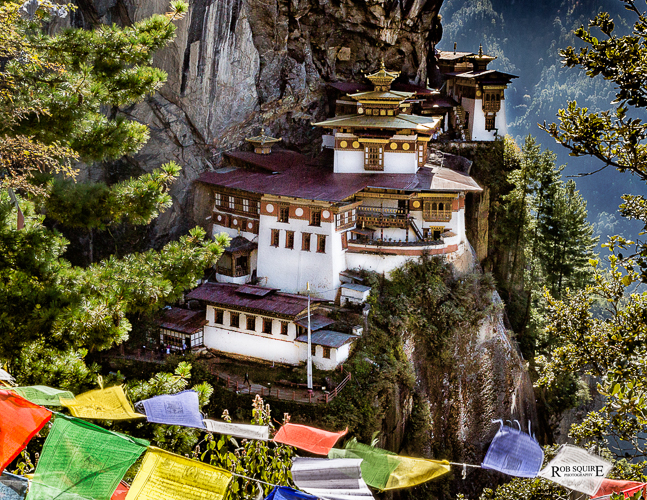 If you get the chance to visit this beautiful country, rich in gentle and beautiful Buddhist customs and beliefs, GO.

Photo tip:  To add drama to a shot like I did with the photograph of the Sitting Buddha, try deliberately adding some lens flare. Situate yourself so that the sun or another very bright light is just barely peeking out from behind an object. Set your aperture to f16 if you can and shoot several shots with varying amounts of the sun showing.